Encourage new muscle growth in your delts with a handful of rut-busting movements.
When it comes to exercises on shoulder day, overhead presses combined with single-joint moves for the front, middle, and rear delt heads is as routine as it gets.But if your shoulder workout is as stale as a year-old loaf of bread, we’ve got seven delt movements that are highly uncommon, making them perfect choices to bake right into your routine.How important is introducing fresh exercises into your workout?
A 2014 study published in the Journal of Strength and Conditioning Research suggested that changing exercises is more important than loading schemes in improving strength.1 If you’ve been following the same old routine and not seeing results, perhaps it’s time to work some of these novel exercises into your delt workout.
Consider inserting one or more of these movements into your shoulder routine to get growing again.

What It Is: A multijoint movement that emphasizes the front and middle delts, alternating the stress from one side to the other on consecutive reps. It can also be performed using a dumbbell.

About This Move: This exercise works the shoulders a bit differently, according to Tumminello, because your shoulders are somewhat forward of your body rather than out to the sides. You also get a bit of core work because the weight is offset. “The benefit is almost like a side plank,” says Tumminello. “It also shifts the weight such that one arm is the primary mover and the other is secondary, whereas for the next rep it’s reversed. That creates a different stimulus where it’s not a one-arm or two-arm press—it’s somewhere in between.” 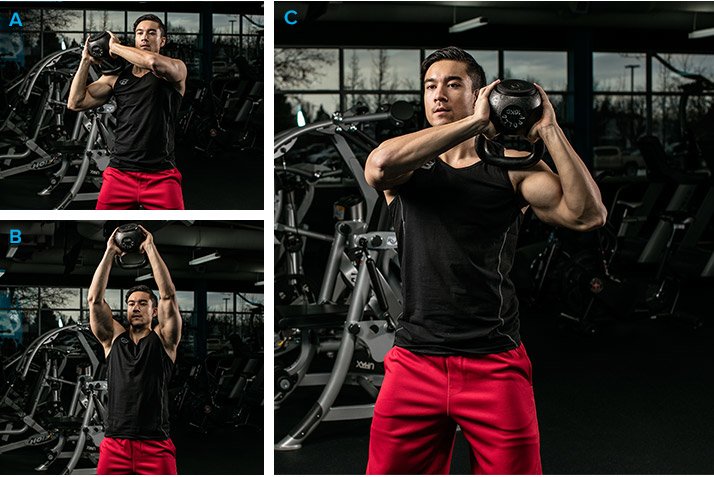 Training Tip: Hold the kettlebell with your thumbs hooked around the handle at your right shoulder with your elbows underneath it. Press it above your head, then lower it to your other shoulder, then reverse it. The motion is in the shape of a triangle.

“Do an even number of reps, counting every one, whether it’s a primary mover or not,” says Tumminello. “If you can do dumbbell presses with 20 pounds for 10 reps, try a 40-pound kettlebell and you may be able to do 14 or so total reps.”

He recommends doing this move after your heavy presses. “Generally speaking, do your heavier lifts first and lighter stuff toward the end,” he says. “This exercise may be done for sets of 12-20 reps. It’s hard to go heavy with this movement because it’s challenging to even lift a very heavy kettlebell off the ground. So it doesn’t make for a good first movement.”

What It Is: A single-arm (unilateral) multijoint overhead press that emphasizes the front and middle delts.

About This Move: According to Tumminello, many people find traditional overhead presses uncomfortable or even painful because the repetitive nature of going directly overhead can inflict cumulative damage to shoulder joints. “The angled press instead allows the shoulder to follow a more natural arc, making it a more comfortable variation of the shoulder press, even for individuals who have shoulder problems,” he says. He adds that pressing just one side presents an added challenge, because the weight’s off-center, so your core has to work harder. 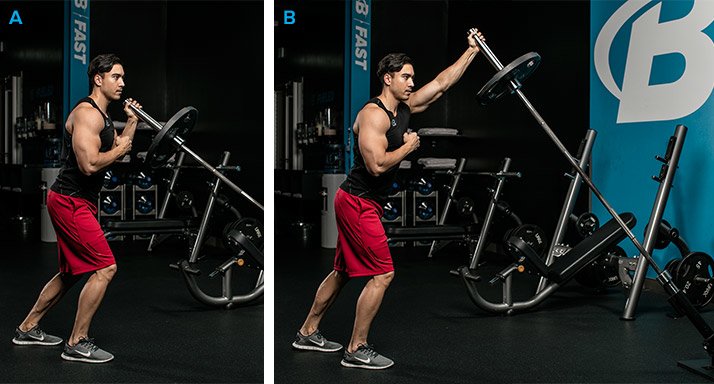 Training Tip: You’ll want to attach one end of the barbell into a rotational device, called a landmine, that’s fixed to the ground. Keeping your knees unlocked for better balance, press overhead and forward to full arm extension. Do all reps for one side before repeating with the other. Tumminello recommends 8-12 reps for 3 sets.

What It Is: A multijoint movement that emphasizes the front and middle delts, alternating the stress from one side to the other.

About This Move: “If you have shoulder problems that prevent you from doing overhead presses, angled presses are a good option because you’re not going as high above your head; you’re not closing the shoulder joint as much,” says Tumminello. “It’s a way to train shoulders in a pressing action that’s a little more shoulder friendly.”

Instead of using just one side at a time during the movement as with the single-arm landmine press, you’re using both arms, pressing up to your midline and then lowering to the opposite side. Here, you’re doing a triangle motion again. You still have an offset load, but you’re not pressing it vertically. The load is pressed in more of a diagonal fashion and back and forth between sides. 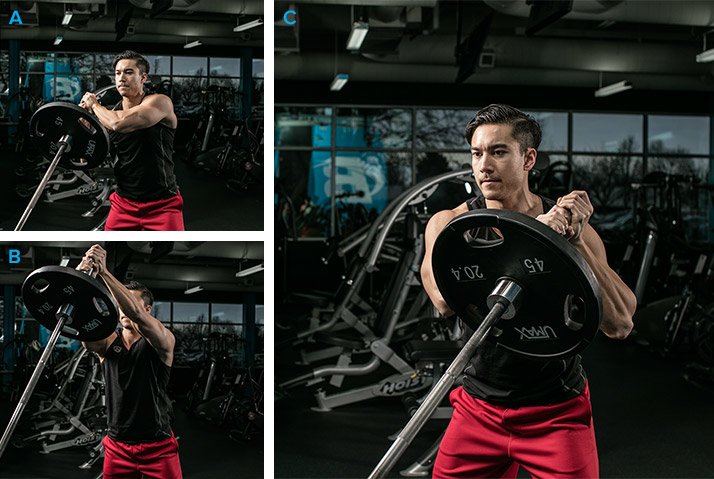 Training Tip: As with the kettlebell shoulder-to-shoulder press, determining the right weight is tricky because for every two reps, each side becomes a prime mover and then a secondary one. So do an even number of reps between 12-20 overall, counting each time you lift as a single rep.

If you’ve got shoulder pain, this might be your go-to shoulder press; otherwise, do it later in your workout. Heavy shoulder presses should be the first exercise in your routine.

What It Is: A single-joint movement for the rear delts.

About This Move: This movement is a variation of bent-over lateral raises. “A recent study showed that the EMG activity for the posterior deltoid and infraspinatus was greatest when performing a reverse fly with a neutral hand position (palms facing each other) compared to a pronated (palms-down) grip,” says Tumminello.2 “Gripping the dumbbell such that your pinkies butt against the inside plates forces you to resist shoulder internal rotation by using more of your posterior delts as external rotators. That creates higher activity for the rear delts.” 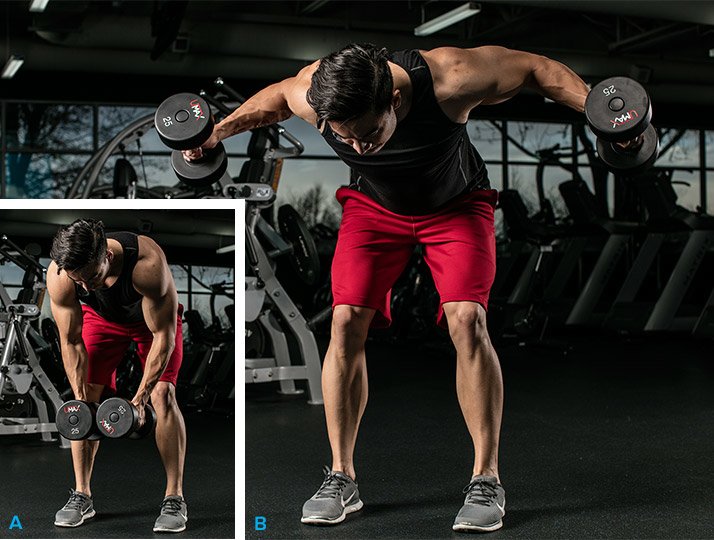 Training Tip: If you’re using the machine version of the reverse fly (done on a pec-deck machine), opt for the neutral hand position. However, the machine version will not allow you to use an offset grip. Do this exercise toward the end of your shoulder workout, performing 3 sets of 8-12 reps.

What It Is: A multijoint overhead press that emphasizes the rear and middle delts.

About This Move: You won’t find many (if any) shoulder presses that recruit the rear delts as a primary mover, but here’s one, courtesy of personal trainer Shawn Carlson at Bodyfit Boise in Boise, Idaho. Set the incline bench to a steep angle, and lie prone against it (chest facing the bench), performing a shoulder press. It really engages the rear delts along with the middle and upper traps. 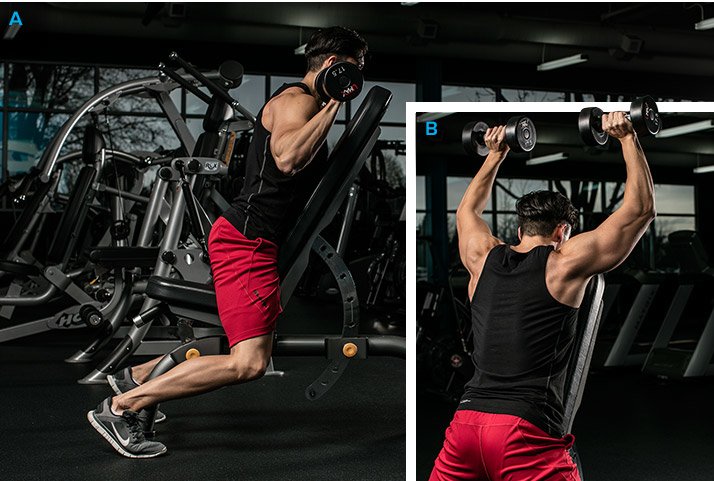 Training Tip: Do this after your heavy presses that primarily target the front delts, middle delts, or both. Perform 3 sets of 8-12 reps.

What It Is: A single-joint movement for the middle delts in which the range of motion is slightly redefined.

About This Move: Leaning away from a stationary post increases the middle delt head’s time under tension. That’s because when done standing, the first 15-30 degrees are governed by the supraspinatus of the rotator, but now that you’re leaning, you remove the supraspinatus and engage the middle head right from the start. By the time you reach shoulder level or higher, you’ve stimulated the middle delt head fibers through a greater range of motion than you can during the standard version. 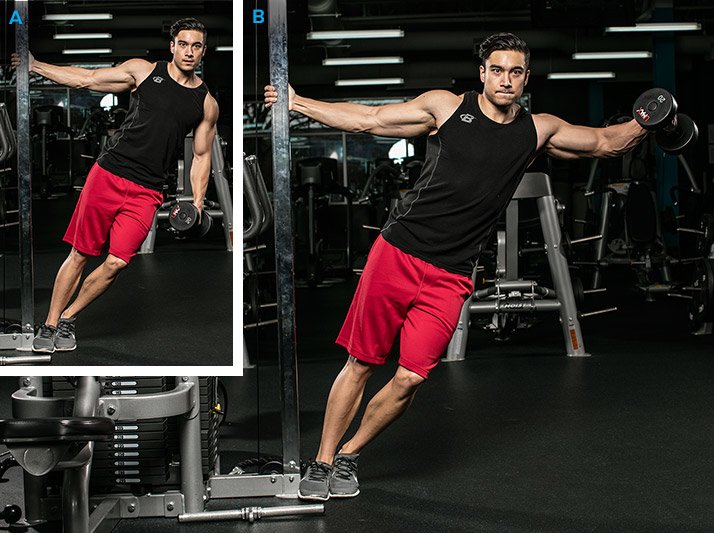 Training Tip: With a dumbbell in your outside hand, find a stable post and stand next to it, feet together, grabbing it securely at shoulder level and leaning away from it until your arm is fully extended. Lock a very slight bend in your working-side elbow that you must hold for the duration of the rep.

Do this movement after your heavy multijoint presses for 3 sets of 8-12 reps. Combine it with single-joint moves for the front and rear delts to ensure you hit all three delt heads in isolation moves.

What It Is: A single-joint movement for the rear delts.

About This Move: This is similar to a cable kick-back, but with the entire arm straight; the movement takes place at the shoulder joint, not the elbow. Hence, it targets the rear delts, not the triceps.

Training Tip: Take the attachment off the cable so you’re gripping just the rubber ball. Align your working-side shoulder with the pulley. Without rising up from the bent-over position and keeping your arm straight, kick it straight back and raise it as high as possible. Don’t twist or contort your body, to ensure the stress stays on the rear delt.

Do this movement after your heavy multijoint presses for 3 sets of 8-12 reps.

One response to “7 Best Shoulder Exercises You’re Not Doing”